College Students Struggle to Meet Basic Needs Across the U.S. 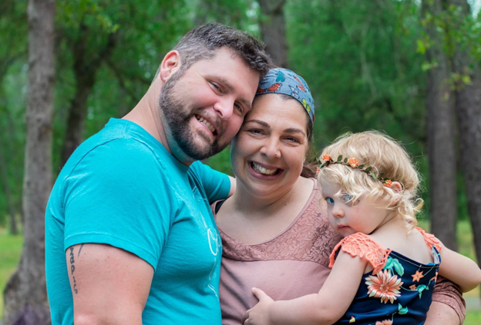 Chante Catt received her admissions letter to Humboldt State University (Humboldt) two years ago – a dream she never thought would be possible. Because of her challenging experiences during high school, Chante avoided pursuing postsecondary education until a trusted mentor encouraged her to enroll in a community college more than a decade later.

Chante says community college was a rewarding experience – she participated in sport teams, joined student clubs, excelled at academics and was accepted to transfer into her dream school, Humboldt. With enthusiasm for the future, Chante and her family, including her boyfriend and one-year old daughter, packed their bags for Arcata, California where Humboldt is located.

The family’s excitement was short-lived. When Chante learned there was no on-campus housing for students with families, she looked for other options, but quickly learned she didn’t qualify for any of the limited rental properties near campus. Without other options Chante and her family became homeless.

First they lived in a tent and then they moved to temporary housing in a local hotel, where they frequently relied on fast food for their meals. During this time, her family spent all the money they had saved. Finally, after months of searching, they secured housing 25 miles away from campus with assistance from several social service programs. “This experience was traumatizing - it affects us to this day,” Chante says.

Chante’s reality is shockingly common among college students across the country. A recent study from Dr. Sara Goldrick-Rab and her team of researchers reveals that more than a third of university students and close to half of community college students are food and housing insecure. Using data from 43,000 students at 66 community colleges and universities across 20 states and the District of Columbia, the study illuminates the pervasive and critical issue of hunger and housing insecurity among students.

Sara’s research affirmed that food and housing insecurity are major obstacles to college persistence and graduation. “It’s becoming increasingly clear that students can’t learn the materials, pass a test or even graduate, if they haven’t had something to eat,” she says. “Many college interventions don’t work because they don’t deal with students’ basic human needs first.”

In September 2018, with the support of ECMC Foundation and others, Sara launched The Hope Center for College, Community, and Justice at Temple University (Hope Center). The Hope Center is an evolved and enhanced version of the former Wisconsin HOPE Lab (HOPE Lab) at University of Wisconsin-Madison, which since 2013 has conducted research on college affordability and food and housing insecurity among students.

The HOPE Lab’s work increased public knowledge about the growing crisis of hunger and homelessness among students. Their research was featured by major media outlets like The New York Times, The Washington Post and the Daily Show with Trevor Noah and resulted in a best-selling book, Paying the Price. The HOPE Lab’s efforts also spurred more than two dozen state and federal new legislation and led to the start of an organization, Fast Fund, which provides emergency aid to students across the country.

With the desire to take the HOPE Lab to the next level, Sara decided to scale her work and change her approach. Sara and her team developed a three-pronged model, which integrates policy, practice and perception. Rather than focusing mostly on research, as the HOPE Lab did, “our researchers work hand-in-hand with practitioners and communication professionals to ensure that everything we produce is timely, relevant and accessible.”

The Hope Center plans to conduct research and evaluate its impact and influence on programs like food pantries, housing and emergency aid programs across the country. They will disseminate their findings through research journals and share their work at colleges and conferences, over social media, and through targeted outreach. The Hope Center plans to tackle the problem systemically, by helping institutions and policymakers implement solutions to help this population.

At the student-level, it is easy to find many students whom Sara and her team have inspired. Sara says students reach out to her every day through letters, email, text messages, and the phone to share their struggles.

Chante is one of the many students who have been inspired by Sara’s work. She used Sara’s research to inform her own efforts towards combating housing and food insecurity among students at Humboldt and in the wider community.

Two years ago, Chante founded the Humboldt State University Homeless Advocate Alliance, which works directly with and advocates on behalf of students experiencing housing insecurity. Because of her advocacy efforts, the university created the first homeless student liaison position and appointed Chante to the role. To date, the group has worked with more than 300 students, secured a 24-hour space available for students, advocated for equity and fair housing practices, among many other achievements.

Like Sara, Chante has a similar vision and passion: “If we want our students to succeed, we need to understand their basic needs. My hope is that every campus would have a social work hub to address [students’] basic needs. They are people first.”