Seeds of Change: Beyond 12 Founder Goes from Struggling Student to Education Activist 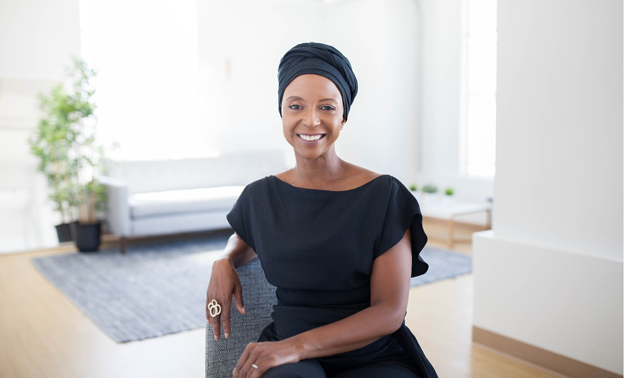 Relating to a problem is often the precursor to solving it. Just ask Alexandra Bernadotte, founder and CEO of the nonprofit organization Beyond 12. Alex once was the type of student she now seeks to serve.

Today, with grant funding from ECMC Foundation, Beyond 12 is taking an evidence-based approach to evaluating the impact of its new pilot with a keen eye on critical assessment and replication.

A Dream Begins
Born in Port-au-Prince, Haiti, Alex was left in the care of her grandmother at three months old, while her parents immigrated to the United States in search of better opportunities. Raised by her grandmother and extended family, Alex was seven before she reunited with her parents in inner-city Boston. Communicating only through letters and pictures, the family’s separation was a time of sacrifice for everyone.

“My end of the bargain was that I had to do well in school,” she said. “My parents stressed the importance of education and a college degree as keys to a better life. However, neither of my parents went to college, so it was an abstract concept—we didn’t understand how to get there.”

Years later, the college plan started taking shape through something unexpected—an overheard conversation. At the time, Alex’s mother was working as a phlebotomist for a local hospital in Dorchester, Massachusetts, where she heard a few doctors discussing their children’s college plans. They mentioned “Ivy leagues” and “Dartmouth”—neither of which made sense to her—yet when she got home, she excitedly shared that Alex should attend Dartmouth. A plan had been formed and the whole family was on board.

Alex did her part by earning good grades, taking AP classes and performing well on her SATs. Fulfilling her family’s dreams, Alex was accepted into Dartmouth. But after years of hard work to get into college, Alex was shocked to realize that receiving her acceptance letter had been the easiest part. 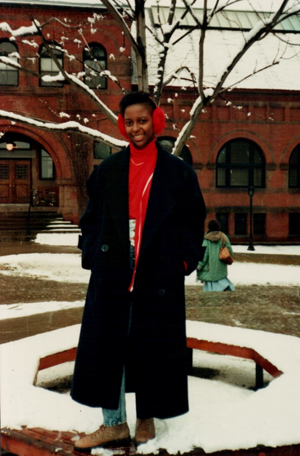 During her first year, Alex struggled academically. She was afraid to ask for help and worse, she felt alone. When she was placed on academic probation during her second year, Alex was distraught. But with her family’s and friends’ encouragement and support, Alex decided to change things around.

“I became determined to go back to Dartmouth my second year with a game plan,” she said.

This time, Alex sought the help she needed and reached out to mentors, professors and academic tutors. She also became more engaged on campus by joining activities and clubs, including an African American Society and a historically black sorority. Not only did she become an activist on issues for black students, women and other marginalized groups, she also found her political voice.

Ultimately, Alex graduated in four years and became the first in her immediate family to earn a college degree. She went on to graduate school at Stanford University.

Catalyst for Change
The challenges Alex faced during those early years sparked an idea: What if there was a way to ensure other first-generation college students wouldn’t struggle with the same challenges she had?

“My experience at Dartmouth planted the seed,” she said. “I started to realize I wasn’t alone. It left me asking a lot of questions, like ‘Why does this happen to so many students?”, ‘What could institutions do differently?’ and ‘What could my high school have done to better prepare me?’”

After graduate school, Alex worked for New Schools Venture Fund, a national philanthropic organization, where she created the blueprint and business model for Beyond 12 (B12). They ultimately helped fund its launch in 2009.

Named by Fast Company magazine in 2014 as “one of the world’s top 10 most innovative companies in education,” Beyond 12 is a technology-based services organization that aims to increase the number of college graduates from low-income, first-generation and historically underserved backgrounds. Through a longitudinal student tracking platform and a personalized student coaching app, B12 ensures that its students receive the timely support they need to transition into and persist through degree completion.

What makes B12’s approach so innovative? First, it combines technology with a human element through a mobile app called MyCoach that offers virtual coaching. Secondly, it allows students to report their progress to both their college and high schools and serves as an on-demand guide to help students keep track of key deadlines, resources and opportunities. By sharing students’ self-reported data to both secondary and postsecondary institutions, B12 links K-12 with higher education—eliminating the idea that student success is solely a higher education challenge.

B12’s pilot program served nine high schools and approximately 450 college freshmen in Chicago, Philadelphia and the San Francisco Bay Area. B12 has since coached more than 7,000 college students and tracked the postsecondary progress of 100,000+ students. At a 75% three-year persistence rate, cohorts have exceeded both the national three-year persistence average of 48% for underrepresented students and their own target rate of 70%.

ECMC Foundation Funds Expansion Efforts
ECMC Foundation joined the funding effort in spring 2018 to support B12’s partnership with College Advising Corps (CAC), a college access program and past ECMC Foundation grantee, to design and pilot an integration of their models to serve 750 students who attend New York City (NYC) public schools as they transition and persist in higher education.

Students receiving college access support from CAC advisors in select NYC schools will receive college persistence support from B12 coaches upon high school graduation and through their college years. Together, their goal is to develop a seamless college transition pipeline with proven results for mass scalability.

Building on each organization’s prior success, B12 and CAC plan to increase their impact by coordinating their service models to ensure that 75% of the students they serve together will earn a college degree or remain enrolled six years after they enter college. B12 and CAC have engaged a third-party firm, Root Cause, to lead and fast-track the planning, implementation and management of their coordinated efforts.

An evaluation, led by expert Dr. Eric Bettinger at Stanford University, will assess whether the pilot meets the established success criteria to further expand to more NYC schools and replication in other geographies.

“We’re thinking big,” said Alex. “Our goal is to spread this approach across the country and coach one million college students annually by 2025.”