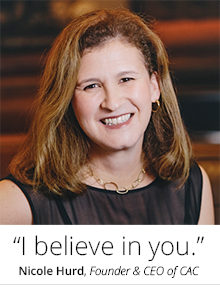 These are the four most important words for high school students and their college advisors to hear, founder and CEO of College Advising Corps (CAC) Dr. Nicole Hurd said at the organization’s 10th annual summit last week in Washington, D.C.

This key message, along with advice and best practices were part of the many topics discussed at the four-day CAC advisor summit. Packed with motivational keynote addresses and interactive breakout sessions, the annual gathering of advisors from across the country is designed to help them succeed in executing CAC’s mission: helping low-income, first-generation and underrepresented students enroll into college.

CAC advisors are not the typical school counselors; they are recent college graduates who serve one to two years at underserved high schools that have a severe deficit in school counselors. CAC partners with 24 universities and colleges across the country to recruit, train and place these graduates.

CAC’s New Program in Arizona off to a Great Start

Jimena Morales of the University of Arizona Advising Corps was one of the advisors at the summit. She says a lot of her work involves helping students navigate the complex and daunting process of college admissions and securing financial aid. 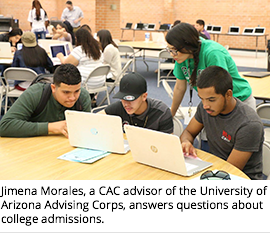 One student who she worked with last year thought he would not be able to attend college because his parents were unable to afford it. Though he was initially hesitant, through Jimena’s persistent advice and encouragement, he applied for and won a number of scholarships. But, most importantly, Jimena says, “I made him believe in himself and his potential.”

CAC uses a unique near-peer model that helps advisors uniquely relate to students’ experiences. More than just being close in age, many of the advisors, like Jimena, come from backgrounds similar to their students.

“I am a first-generation college student myself and I was able to go to college only because of a scholarship,” Jimena says. “I know what my students are going through.”

The University of Arizona Advising Corps launched last year with the support of ECMC Foundation. The Foundation also made investments to expand the Virginia Advising Corps, reaching underserved high schools in rural parts of Virginia; and to start a program in Florida by the 2017-18 academic school year.

Up Next for CAC: An Ambitious Growth Plan

Currently, College Advising Corps’ 600 advisors work in 600 high schools across 15 states and assists more than 180,000 students. But, it is not stopping there. With an ambitious plan to scale, Dr. Hurd hopes to reach half of the 1.4 million low-income, high school seniors across the country within 10 years.

“If we are to have a vibrant democracy and working economy, college access and success is critical to scale,” says Dr. Hurd. “We won’t get to where we need to go as a country, an economy, and place of opportunity unless we increase the number of first-generation, low-income, underrepresented students going to college.”

Scaling is only part of it; it is “critical to scale CAC with excellence and rigor,” she says. CAC partners with Stanford University and Evaluation and Assessment Solutions for Education to evaluate the program. Results help them learn what’s working, what isn’t and what should be replicated. The researchers also explore and pilot new, innovative ideas, such as a parent texting service called “Parent Academy,” e-advising and transportation vouchers for students.

Part of ECMC Foundation’s investment in CAC is supporting research and evaluation. “The Foundation’s funding allows us not to just scale in schools such as Arizona, Virginia, and Florida, but also to build out the learning lab that is all about creating knowledge to change the field,” says Dr. Hurd.