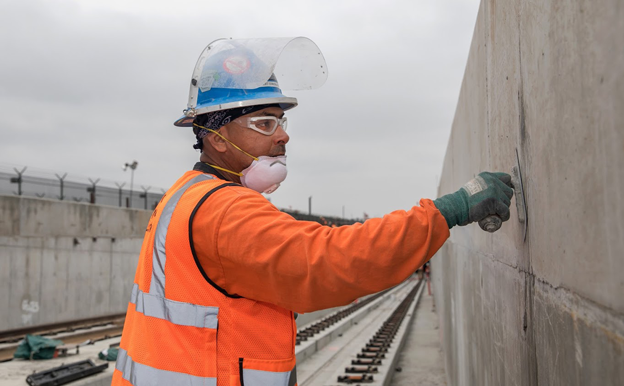 It turns out ECMC Foundation President Peter Taylor's bet on Scott Budnick's pre-apprenticeship program at the Anti-Recidivism Coalition (ARC) has paid off.

Last month, Albert Corona, one of the program's participants in a construction trade apprenticeship, visited ECMC Foundation to share his success story. A native Angelino, Corona, 41, has been in and out of prison since his teenage years and has served seven sentences for drug and gang-related crimes.

While he wanted to change each time he came home, Corona found it very challenging. Staying connected to his old friends, who were negative influences, Corona said, was a big factor. His mother, who accompanied him during the visit agreed. "Albert has a big heart and tried really hard, but he just had bad friends," she said.

While sitting in solitary confinement the last time he was incarcerated, Corona was handed a flyer about ARC and its pre-apprenticeship program. Corona said, "This time I was ready to change. I made the decision to separate myself from anything and anyone who would influence me to fall back into my old behavioral pattern." Also a father of two, Corona said he committed to changing so that he could finally be involved in their lives.

Three days after his release, Corona went to ARC to inquire about the program. He was admitted after joining ARC as a member and passing a rigorous pre-screening process, which includes drug tests, math and writing assessments, an interview with ARC staff, among other requirements.

During the first two weeks of the program, Corona and other participants take part in a life skills course that covers workplace expectations and soft skills, such as discipline, punctuality, proper dress code, communications, collaboration and teamwork.

Cohort members also work with life coaches, who provide guidance and mentorship throughout the 12 weeks. Corona said his life coach, Isaac Lopez, played a critical role in his success. Lopez helped him with a wide range of issues including navigating the dynamics and stress of reintegrating back into his family life to working on his interview and public speaking skills. Corona said what made Lopez unique was that "he wasn't just a case manager, but someone who genuinely cared."

After the first two weeks of the pre-apprenticeship program, the participants take classes at Los Angeles Trade-Tech College (LATTC) for 10 weeks to prepare them for their apprenticeship. Corona had taken construction classes before, but this time, it was different. Unlike his previous instructors, LATTC's Sue Blumenfeld and John Olszewski provided more hands-on, real-world training. "We weren't just reading out of a book," Corona said. "They prepared us to go into the industry."

The apprenticeship is a commitment that lasts between four to five years. There are eight periods, which consists of six months of field training and two weeks of classroom instruction. After each period, participants receive pay raises and graduate to the next level. Corona plans to be a cement mason upon graduating and said he hopes to "become as valuable as possible."

Corona works 40-50 hours a week on the Crenshaw/LAX Transit Project, which is expanding the subway system through several cities within LA County. "I wake up every morning, hungry and motivated because I have passion for what I do. My children and grandchildren will see the project I have worked on. It will also be an effective means of transportation for people of LA. It's amazing that my work will help the community of LA for many years to come."

When asked what his favorite thing about ARC is, Corona said: "The people. We're like family. ARC and the friends I have made in the program gave me hope and motivation. They made me believe that I could become successful too."