Book Recommendation: Other People's Children: Cultural Conflict in the Classroom 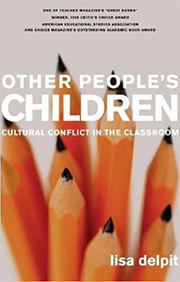 A must-read for educators for over 20 years, Lisa Delpit's Other People's Children: Cultural Conflict in the Classroom, looks into the challenges of cultural miscommunication and misunderstanding that face many teachers and students across the U.S. and abroad. For teachers in particular, this series of essays highlights the implicit biases present in the mainstream education system as well as within themselves, and how that disproportionately impacts students of color.

This book remains relevant and challenges all educators to make sure that the voices and perspectives guiding educational change are representative of the populations they serve.