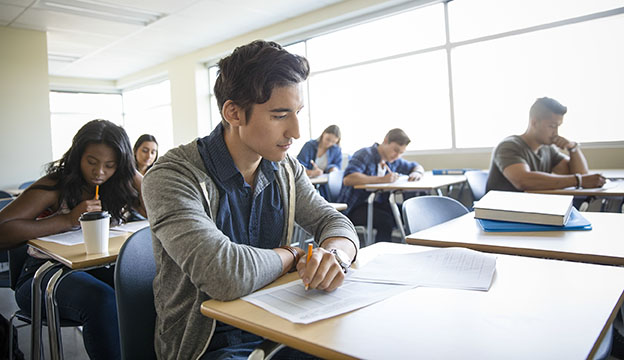 When was the last time you were in an algebra class? Can you remember how to simplify the following?

Maybe the question would be less intimidating if you had open resources—a study guide, a textbook, peer support—that jogged your memory and drew upon your foundational math skills. If you're an entering community college student and you can't simplify the above, the stakes are dizzyingly high. Even after being admitted, many entering college students are required to take a placement exam, usually in subjects of math and English. Scoring poorly on this exam could result in being placed into a remedial course, which does not count for college credit and, consequently, delays time to degree completion.

About half of all college students are placed into at least one remedial course. In California's community colleges, 80 percent of entering students are placed into remediation, the most common being math. Measures have been taken to accelerate time spent in remedial courses, including the Carnegie Math Pathways, an ECMC Foundation grantee. The logical question to ask, however, is: Why are so many students placed in remedial education at all?

California is taking action to change that. On Friday, October 13th, Governor Brown signed AB 705 into action. The landmark bill requires that community colleges take a student's high school performance into consideration when determining course placement for college-level math and English. Research shows high school performance and GPAs are more accurate predictors of college readiness than assessment tests—even for students who do not enroll directly in college from high school. This cuts out the potential detour on students' college pathways, allowing them to progress through their postsecondary education and college credits more smoothly. Coupled with the California State University's acknowledgement of statistics courses as transferable credit, students who are not intending to pursue STEM-intensive majors are now able to transfer based on relevant coursework completed.

The Campaign for College Opportunity, an ECMC Foundation grantee, announced the signing of AB 705 on October 16. Voices of administrators and students alike chimed in to praise the progress of state policy in favor of student success.

"This is an important milestone in the drive to improve student success and the first of several steps our system is taking to put students at the center of all policy discussions because they come with different circumstances and we need to be able to adapt to meet their needs," says California Community Colleges Chancellor Eloy Ortiz-Oakley.

On the student side, Andres Salazar, who is attending College of the Canyons in Santa Clarita, excitedly shared, "I'm so grateful that I didn't get trapped in remedial courses I didn't need. I got an 'A' in College Statistics...Every student deserves this kind of opportunity."

Removing roadblocks on students' pathways toward degree or certificate-attainment will prove to be a boon to taxpayers and California's economy. Students who are mired in non-credit bearing courses sap their financial aid packages semester after semester, eventually running up against the cut-off point for assistance and become more likely to drop out of college. Without a degree or appropriate credential to qualify for job opportunities, they then struggle to make ends meet and cannot contribute to the greater state economy at the same rate as a college graduate.

For the state of California, in which Latinos are the largest single ethnic group at about 40 percent of the total population, AB 705 has significant implications. This news comes on the heels of a recent report from Georgetown University, which observed that Latino students are increasingly pursuing postsecondary educations and are usually beginning their journeys in the community college system. Despite this surge in college access, Latino students are not achieving degree completion at the same rates as their white peers, who are also more likely to begin at four-year institutions in the first place. AB 705 alleviates one more barrier to transfer.

In other words, it is the antiquated bureaucracies that are stifling student success. Students have proven that they are college-ready and we should honor their efforts by recognizing their prior success and encouraging them to progress rapidly and deliberately in their fields of study. In finally updating our higher education policy to 21st-century relevancy, we invest in the opportunity for more economic growth and sustainable futures for Californians.