Michelle Obama Delivers Final Speech: "With hard work and a good education anything is possible." 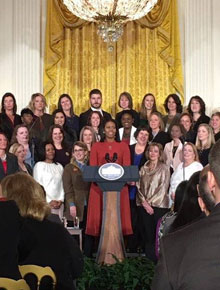 The School Counselor of the Year Award is a tradition Mrs. Obama launched in 2015, and is a part of her Reach Higher Initiative. The core focus of the initiative is to inspire every student to enroll and complete postsecondary education–whether at a traditional four-year college or university, community college, or vocational/professional training program. Terri Tchorzynski from Calhoun Area Career Center in Michigan was selected School Counselor of the Year.

"You are truly among the heroes of the Reach Higher Initiative," said Mrs. Obama to the school counselors in the room and around the country. "You see the promise in each of your students. You believe in them when they don't believe in themselves."

Near the end of her speech, she turned her focus to the students watching across the country. "To all the young people out there, know that this country belongs to you–no matter what walk of life. If your parents are immigrants, you are a part of a proud American tradition: an infusion of cultures generation after generation that has made us the greatest country on earth. If your family has no money, know that with hard work and a good education, anything is possible–even becoming president."

Early in the event a panel of speakers celebrated the Obama Administration's legacy and influence on higher education. They noted that across the country, high school graduation rates are at a record high and more young people are going to college than ever. However, "this isn't a mission-accomplished moment. There is still more work to be done," said Former Secretary Arne Duncan, one of the panel members. 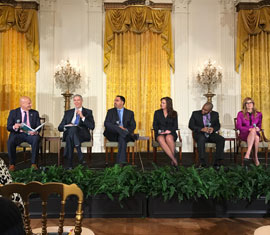 ECMC Foundation's Sarah Belnick was among the select few who were invited to attend the event.

"It was an honor celebrating the counselors of the year and a privilege to be a part of this milestone that honors the First Lady's legacy and work in higher education," she said.

Belnick directs the ECMC Foundation's College Success focus area, and has been instrumental in the Foundation's investments in programs that help more students enroll into, persist through and graduate from college. She runs the focus area with program analyst, Angela Sanchez.