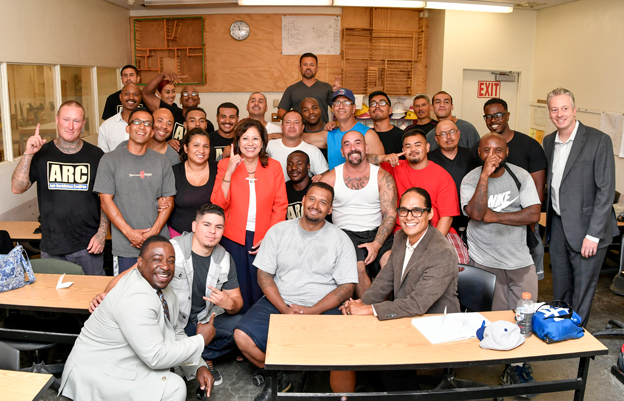 "It was heartening to see the excitement — and tears — in the eyes of the participants as they recounted stories and shared their enthusiasm," Solis recalled.

"Programs like the Anti-Recidivism Coalition's Second Chance Union Training Program are essential for reentry, to ensure that those who have been released from incarceration begin the process of creating better lives for themselves and their families," she said.

Under Solis' direction, LA County committed $350,000 to support the continuation of ARC's Second Chance Union Training Program. Funds went towards supporting the third cohort, which graduated in August 2017 and also the fourth cohort, which will begin in early 2018.

"Education and training are critical to opening new doors and exciting opportunities to a better future. I am proud that Los Angeles is a place where people can get a second chance – or even a first chance – at the better life they deserve," Supervisor Solis said.

"We're looking forward to the next chapter at ARC and our ability to increase career pathways for our often forgotten population of young adults coming home to Los Angeles County from incarceration," Budnick said. "Studies have shown that removing barriers to education and employment changes lives and makes our communities safer. It's rewarding to go from concept to pilot to proven strategy and now to expansion."

"This is exactly what we hope for in our grant investments. The Foundation invests in programs and initiatives that are innovative and have the potential to make an incremental impact in the lives of learners," said ECMC Foundation President Peter Taylor. "Once proven successful, we want our grantee partners to be able to secure funding for their program from additional sources. ECMC Foundation provides launch capital, which for many organizations is the biggest hurdle."