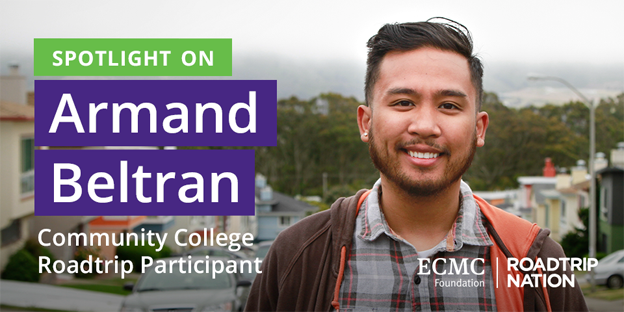 This feature is part of a three-part series. Read the full series here.

Armand, who has been pondering his passions and interests for years, is on a quest to uncover the perfect career for himself. Earlier this summer, he traveled across the country with Roadtrip Nation to find career inspiration and guidance. We spoke to him to learn more:

Armand Beltran, 25, has spent the past eight years studying at his local community college in San Francisco. The Bay Area native's goal is to earn a bachelor's degree, but he is unsure about his career path.

In his quest to find the right industry, Beltran took a trial-and-error approach: he changed his focus of study three times from nursing to IT and finally earned an Associate's Degree in Arts and Humanities. After earning his degree, Beltran decided to continue taking classes in order to complete transfer requirements. Despite his efforts, he remains undecided on which career to pursue.

Ever-the-optimist, Beltran is not giving up. This summer, thanks to Roadtrip Nation, Beltran went on a once-in-a-lifetime cross-country adventure to gain inspiration. Joining two other students, he hopped into a green-RV and hit the road. All three hoped to answer the same question: how can community college accelerate my education and career goals?

Roadtrip Nation, a nonprofit organization, is dedicated to helping young people find career and life fulfillment by placing them on themed road trips to discover their career goals. Beltran first discovered Roadtrip Nation through a book his friend gifted as a college graduation present. When Roadtrip Nation announced a community college-themed trip, he recognized it as a unique opportunity to find clarity in his career.

The students interviewed industry leaders who started their own careers through community college education. Beltran says he was excited for the trip, in part, because he "wanted to learn from leaders who have been successful."

Oakley addressed these common misconceptions and told the road trippers that he has witnessed many students with strong work ethic and career aspirations, and who are the opposite of the community college student stereotype. "As chancellor, he has seen countless students work hard towards where they want to go. They all have the same goal in mind: bringing themselves up," says Beltran. After talking to Oakley, Beltran realized that community college is a great place to start his career.

Along the trip, Beltran met his favorite leader, Diana Trujillo, a NASA engineer, who got her start in community college. Trujillo came to the United States as a refugee, escaping the drug wars in her home country, Colombia. Her perseverance and determination to succeed, despite her hardships, left an impression on Beltran. "I have been in community college for eight years and I wasn't taking advantage of it. Roadtrip Nation made me realize I had to get more serious."

Trujillo also gave Beltran advice on discovering his passions and interests. She told him: "In order for you to know what you really want to do, find out what kind of person you want to be first." Beltran realized, in order to find answers about his career that he desperately seeks, he needs to do more self-discovery and reflection.

After four weeks on the road, he returned home with a greater appreciation for his community college education. Currently Beltran is still attending community college in order to earn his transfer requirements, and hopes to transfer to a California State University. While he is still trying to figure out exactly what he wants to do, he knows that it will involve helping others. "I want to be more inspiring somehow; I want to learn different experiences, help other people reach their full potential, and be a role model for other people."