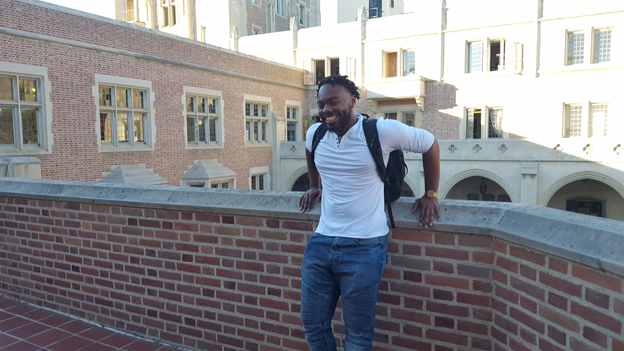 DaMonte Jones pictured at the University of California, Los Angeles

It can be daunting to be at a college where you are part of an underrepresented minority group of students. At the University of California Los Angeles (UCLA), a large public university of 45,000 students only 4.8 percent are African American.

For DaMonte Jones and other black students on campus, this means a constant battle of trying to fit in and establish one's identity on campus. Jones, now a junior studying Anthropology at UCLA, says the campus climate initially left him feeling limited in what he was capable of accomplishing. At the start of his freshman year, Jones was eager to become involved with campus politics, residential life, academic/career counseling, among other student life activities, but says he didn't think this was possible.

When he didn't see many black students leading these student life activities, he says "it felt very discouraging." At that time, Jones decided to place these aspirations on a pause.

The problem of underrepresentation is not exclusive to UCLA, but exists broadly across colleges and universities in the country: While black student enrollment witnessed small gains since 1994 from 11 percent to 14 percent of the student population, at top-tier universities the statistic has remained flat at 6 percent.

Seeing few of one's peers enrolled at an institution and seeing even fewer succeeding can be discouraging for many students, including Jones. However, Jones says his mindset began to shift and confidence grow halfway through his freshman year after joining the Black Male Institute (BMI), a group on campus dedicated to improving the educational experience of black students at UCLA.

Formed on campus in 2010, BMI began as a research course. During that formative year, a study BMI researchers completed revealed that black men at UCLA overwhelmingly face obstacles to college retention and degree completion. Challenges include financial barriers, lack of support networks for both emotional and academic success, to name a few. The study also revealed that an intervention consisting of mentoring, supplemental nonacademic instruction and monitoring can increase the likelihood of persistence and degree completion.

"While UCLA is a resource rich place, black males were not accessing these resources," said Dr. Samarah Blackmon, associate director, Black Male Institute. "When you're part of a marginalized group…sometimes, students might even think they don't have the right to access resources."

As a result of the study, in 2011, BMI created BLACKLIMATED, a two-year program that assists black male freshmen and transfer students in their successful navigation of the UCLA campus. The course introduces students to everyday resources in mental health, financial literacy, social life and residential life. It also focuses on skill-building strategies that are critical for academic success, such as study habits, stress management, and more. During their second year, students meet weekly with faculty mentors who introduce them to research and potential career paths. The same program tailored to black female students, Sister-to-Sister, was started in 2014. 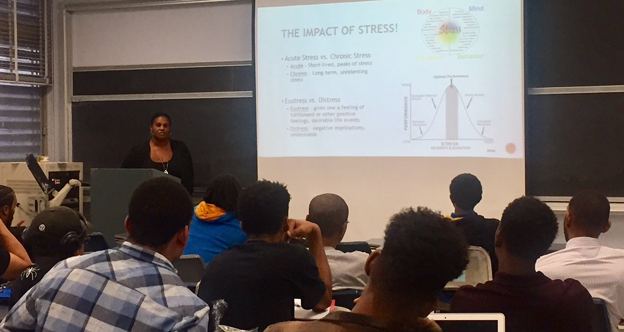 The stigma against asking for emotional help and support is one topic addressed in BLACKLIMATED. Dr. Nicole Green, a UCLA campus psychologist, covers topics of stress and anxiety for black students and provides information on how to access help.

Dr. Tyrone Howard, professor of education and director of UCLA's Black Male Institute, at a recent class, urged students to let go of their fears and barriers: "Black men hurt. Black men feel. When things get rough, you have to tell us what you need."

In 2015, ECMC Foundation partnered with BMI to fund the program for 40 first-year students. Preliminary evaluation data shows promising results: GPA and units completed among participants are higher than black students who did not participate in the program. Also, all participants remained enrolled at UCLA and persisted on to their second year.

Aside from grades and units, BMI most importantly empowers black students.

"BMI helped me break through my barriers," Jones says. "The black community can oftentimes feel confined in a box in terms of what we're capable of. BMI pushes us outside our boundaries." With encouragement from BMI's mentors and his fellow colleagues, Jones went on to become a tutor, a residential advisor, counselor and teaching assistant.