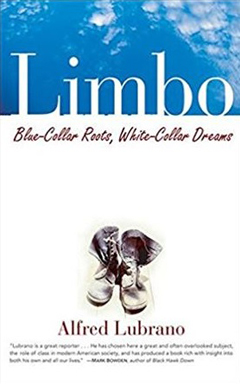 Philadelphia Inquirer award-winning journalist Alfred Lubrano ventures deep into the social terrain that so many of our first-generation college graduates experience: the no-man's land that exists for people of blue-collar, working-class origins who are now living white-collar, middle-class lives.

For this particular population, Lubrano coins the term "Straddlers," as they teeter on the divide between one social class and the other. The author is the son of a Brooklyn bricklayer and went on to pursue his bachelor's degree at Columbia University. Drawing not only from Lubrano's personal experience but also from 100 other Straddlers, Limbo: Blue-Collar Roots, White-Collar Dreams offers a detailed account of the duality that exists for the first-generation middle-class. Although Limbo would not be classified as an academic text, Lubrano diligently culls the research of sociologists to weigh in with their expertise.

Straddlers are never completely comfortable with either their working-class families or upper-income professional colleagues. In Limbo, readers are given concrete examples of how Straddlers' cognitive dissonance plays out in their lives and in the workplace. At home, Straddlers find themselves alienated from family and community as their newly attained lifestyle offers both privilege and perspectives that are not all shared. In their professional lives, Straddlers are at odds with the austere values of their upbringings—discomfort with ambiguity, disdain for extensive diplomacy, and distrust of a perceived educated elite—which clash with the inclination toward tact and discretion in their new world.

“Lubrano writes, "Mobility means discomfort, because so much has to change." For me, it was no more abundantly clear than in the realization of class culture differences in college.”

The warring psyche that Limbo explores is particularly relevant to first-generation college students. Finding themselves sudden inhabitants of the privileged space of the ivory tower, first-generation students have taken the first step toward occupying Straddler limbo, and these lessons hit home hard. Lubrano writes, "Mobility means discomfort, because so much has to change."

For me, this was no more abundantly clear than in the realization of class culture differences in college.

During my own undergraduate experience at UCLA, I found a tightly knit community of kindred first-generation students through a summer bridge program. Thanks to the summer bridge, we were ready for the fall quarter: we knew the campus, where our best resources and community hubs were and—most importantly—that we were not alone. This experience, however, gave me the impression that the majority of students on my campus were the first in their families to go to college. My roommate in my second year of undergrad quickly corrected me.

Early in fall quarter, I invited her out to tour the campus with me since she was a freshman and had not participated in the summer bridge program (I never thought that maybe she didn't qualify). My roommate primly replied, "I think I know my way around here just fine. Both my parents went to UCLA. I'm a baby Bruin, remember?"

After that exchange, I looked differently at the alumni who brought their small children to play on the expansive lawns between UCLA's majestic Powell Library and the iconic Royce Hall. I never knew what the campus looked like until I enrolled—and I grew up in Los Angeles. Abruptly, the advantages of having a college-going culture in one's family manifested before me in something as simple as just knowing what a postsecondary campus looks like.

"It is, Straddlers will tell you, during the unguarded moments on campus that class differences smack you in the forehead," Lubrano writes.

If there is hard criticism to be had with Limbo, it is that Lubrano could have spent more time evaluating the role of race and ethnicity in his subjects. With the systemic underpinnings of race in our society, Straddlers of color undoubtedly find their class conflicts shaded by this intersectional identity. Taking the Los Angeles Metro home from work, I struck up a conversation with a young, Latino construction worker. He pointed out that he was "doing Mexican work." As a Mexican-American working in philanthropy, the discussion caused me to reflect more deeply on the associations made with my profession: white, wealthy, and exclusive. What would my grandfather, an immigrant and a janitor at a theater less than one mile away from UCLA, have thought? I think I have a sense. Decades ago, when my father asked him about his own chances of attending UCLA, my grandfather brusquely dismissed it, saying, "Haven't you noticed? It's whites only." The surrounding and internalized racism that still haunts our society certainly would have been a fascinating dynamic to add to Limbo's exploration of social class voyaging.

Limbo is, nonetheless, a compelling book that reads quickly. Lubrano writes with both clarity and wit, constructing the narratives of Straddlers who burn bridges in their quest to fulfil their parents' wishes of social mobility. This is a must read for all organizations and practitioners who serve the students that traverse the rocky pathway from the working-class to the white-collar workspace.