Building on the success of the Community College Roadtrip conducted in 2018, Roadtrip Nation continued to promote its “One Step Closer” film while it aired on public television stations nationwide throughout 2019.

The first event held in New York City and hosted by Graduate NYC, College Access Consortium of New York, highlighted the promising practices taking place at CUNY’s community colleges. Speakers included representatives from Community College Research Center, Kingsborough Community College, and Borough of Manhattan Community College.  The second event was held in Chicago and hosted by City Colleges of Chicago and featured representatives from ECMC Foundation partners One Million Degrees, LeadersUp, Women Employed, and YearUp who talked about how they partner with the City Colleges of Chicago to create educational and professional opportunities for communities across Chicago. The third and final event was held in Raleigh and hosted by ECMC Foundation grantee North Carolina State University and featured a panel of community college experts and attendees who explored how community colleges can change perceptions and improve outcomes.

Becca’s remarks at the Chicago event are shared below.

View the “One Step Closer” documentary.

View a selection of photos from the tour. 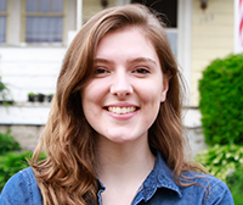 "Melanie, Armand and I are not unique in our search for purpose. We just happened to be chosen to go on this road trip. We represent community college students across the country who are also trying to find their road in life.

Before I went to community college, I believed a lot of the stigma surrounding it. I thought the education probably wasn’t as quality, that the students probably didn’t care—community college was a last resort. But, that turned out not to be the case.

In all my classes, I didn’t meet one student who wasn’t as motivated as I was to find out what they wanted to pursue in life. I met students from all different backgrounds. We came to community college for a number of reasons, and we were met wherever we were with the resources we needed.

After community college, I transferred to the University of Pittsburgh. One day, I was sitting in the Cathedral of Learning, stressing about what my major would be, and I typed into Google, “What should I do with my life,” because Google knows everything. Google gave me a quiz that would tell me what to do with my life in less than five minutes. So I took it—and the answer was, “Join Roadtrip Nation.”

I had no idea what that was, but I went on their website and saw that they take people on road trips and at the end of these road trips, that person knows exactly what to do with their life and they live happily ever after.

At least that’s what I hoped.

So I wrote a very enthusiastic, bordering on desperate (it was actually very desperate) application, and I got it.

The road trip was perspective-shifting and truly life-changing I’m so many ways. When it comes to my career and how I view myself and my future, the biggest thing I learned was the power of agency. That was a theme for me through the whole trip.

I felt a lack of agency because I had been diagnosed with a chronic illness that I felt took choices away from me and that I didn’t have power over. I felt a fear of agency—because I didn’t want to choose wrong.

But all our interviews with these community college alumni taught me that I had to start owning my decisions. Or actually, even just start making decisions.

Community college gives people this power to recognize their own agency in their lives.

There are so many barriers to higher education. Community colleges break down some of those barriers and give students the ability to be decision-makers.

I am currently doing a year of service through AmeriCorps with the Women’s and Children’s Alliance in Boise. And I have no idea what my next step is. But it’ll be my choice, and I’m taking it one step at a time.”

Becca Rodack is a graduate of the Community College of Allegheny County and the University of Pittsburgh. She currently serves as an AmeriCorps member at the Women's and Children's Alliance in Boise, Idaho.