Skip to Content Delivering the Promise of Brown v. Board of Education Demands That We Become Active Change Agents | ECMC Foundation

Delivering the Promise of Brown v. Board of Education Demands That We Become Active Change Agents 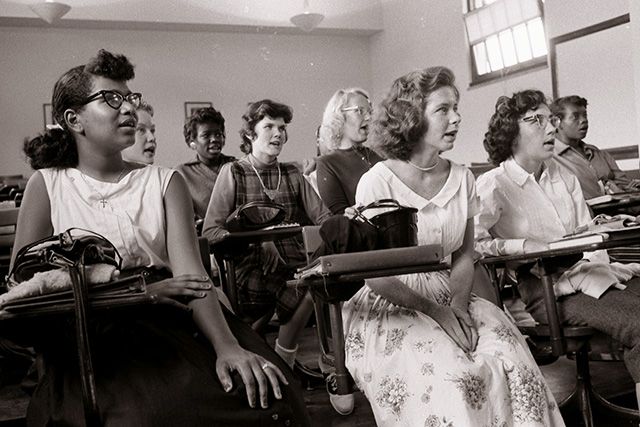 I was born five years after Brown v. Board of Education, the United States Supreme Court landmark case that made education a civil right in America. The Court argued that “separate, but equal,” was a constitutional violation, thus, outlawing segregation in classrooms across public schools and postsecondary institutions across the country.

Before Brown, generations of Black students, including many of my family members, went to schools across town from White students. Like many people in their communities, they believed college was not for Black boys and girls. While postsecondary doors began to open to non-White students after Brown, admissions at previous White-only colleges were few and far between. It wasn’t until the passage of the Civil Rights Act of 1964 – a full decade later – that desegregation of American colleges and universities finally occurred.

Today, more than six decades later, the diversity of students across postsecondary education campuses is evidence of progress. However, it doesn’t take long to realize that the full promise of Brown has fallen short. The Court’s intent in Brown was not just to ensure that all students had a seat in the same classrooms, but that they also had an equitable shot at success. As a nation, we are still far behind in delivering on that promise.

The reality is: While enrollment rates of students of color at our four-year colleges and universities has witnessed gains, these numbers do not cross over to the finish line. From 1996 to 2016, the enrollment of students of color among undergraduates increased from 29.6 percent to 45.2 percent. However, racial and socioeconomic disparities in college completion rates continue to persist. Among the 2011 cohort entering a four-year public college, 71.1 percent of White students graduated within six years, compared to 55.7 percent for Hispanic students and 46 percent for Black students. Success rates by socioeconomic status also reveal gaps in attainment: While 70 percent of students from high-income families earn a bachelor’s degree by age 25, only 12 percent of students from low-income families manage to do the same.

Reasons are complex. On a systemic level, gaps in support, resources and services perpetuate challenges that affect students from underserved backgrounds, including low-income students, students of color, first-generation college students and adult learners. More often than not, these students juggle coursework and jobs in order to pay tuition, fees, rent and basic needs expenses.

These challenges are also experienced by non-traditional students, who now make up more than half of the student population today. These students have one or more of the following characteristics: over age 24, married, have legal dependents and/or are veterans. Ensuring everyone has a shot at success at the educational and career pathway of their choice is not only the right thing to do; from an economic perspective, it is the necessary thing to do. A study from the University of Georgetown found that there will be 55 million job openings in the economy through 2020: 24 million openings from newly created jobs and 31 million openings due to Baby Boomer retirements. Of these openings, 65 percent will require education beyond high school.

Educators, philanthropists, policymakers and fellow citizens cannot sit idle. Keeping the promises of Brown requires that we come to terms with the gaps of opportunity that marginalized students experience – and demands that we become active change agents.

The often-heard mantra, Education is the most important civil rights issue of our time, has been touted by politicians, public figures and education reformers. It is a bold statement that we at ECMC Foundation agree with and are reflecting on as we enter a five-year milestone as a philanthropic organization.

While we celebrate the progress made by our community of grantees and partners, humbly, we recognize that the work is long from over. Until the gaps of equity in postsecondary education are long gone – and until the Court’s intent of Brown v. Board of Education becomes reality – we remain committed to inspire and facilitate education for all students.