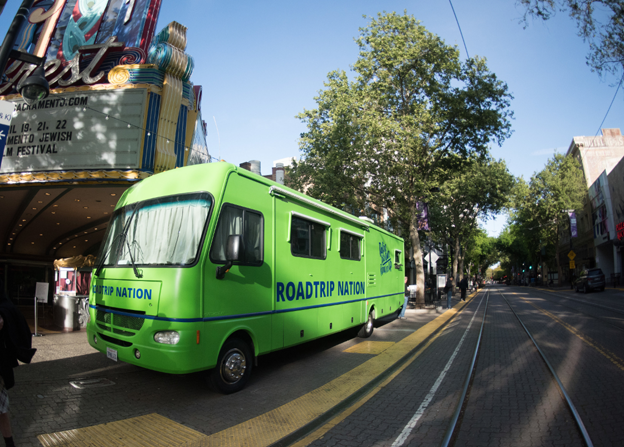 Questions like these have been sparking conversations across the country since April—when Roadtrip Nation debuted "One Step Closer", a documentary sponsored by ECMC Foundation, at the Crest Theatre in Sacramento, California.

The film follows three students— Armand, Becca and Melanie—who are at different stages of their community college experiences, as they travel 3,300 miles across the country in a green RV in search of education and career inspiration.

After its premiere, with support from the Foundation, Roadtrip Nation’s team members, known as "Roadies," traveled to more than 20 cities across America—ultimately covering 6,495 miles during separate spring and fall tours—to spread the word about the film and engage viewers on topics about community college.

The one-hour documentary captures interviews with successful people who started their postsecondary journey at a community college. Through these conversations the roadtrippers learned about a variety of career paths; heard stories of resilience, sorrow and success; and received advice to help them grow both personally and professionally. As they shared about their life journeys, the diverse range of individuals interviewed aligned around similar themes: be passionate, positive, and present; show humility and curiosity; set and achieve goals; ignore naysayers and self-doubt; and express compassion and respect for others.

During the first tour, Roadies made 10 stops including multiple places throughout California, Oregon and Minnesota, ultimately ending in Chicago. After a summer break, Roadtrip Nation continued its tour with another 10 stops, kicking off in September in Pomona, California, then heading to several East Coast sites before heading back through Alabama, Louisiana and eventually ending in Texas.

According to Roadies, the screening and accompanying tour stop activities were well received by the students, faculty and staff. After the event, viewers spent time exploring the RV and reflecting on their experiences.

One student attendee at the former grantee Bright Prospect viewing location said, "I liked that we were able to talk about our interests and talk about how we can make those interests into careers." Another stated, "I can relate to the roadtrippers’ stories. They went through the same thing that I’m going through."

Bright Prospect is a Southern California nonprofit and ECMC Foundation grantee that empowers predominantly low-income students to gain admission to, succeed in and graduate from college. 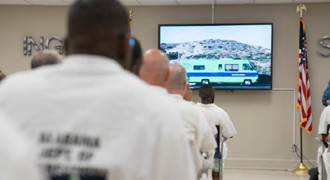 In Deatsville, Alabama, where a screening of the documentary was held for about 100 incarcerated men at Ingram State Technical College (ISTC)—an Alabama community college that serves the state’s incarcerated population—one student said he found "inspiration to let go of fear and to get moving," and that "time waits for no one—the only thing worse than failure is to never try." Another said he walked away with a "fresh dose of confidence and hope for the future."

ISTC is one of 65 colleges across 27 states in the Second Chance Pell pilot program that is receiving technical assistance and training from the Vera Institute of Justice, an ECMC Foundation grantee.

A Bonus Stop at the Nation’s Capital

After the Roadies ended their fall tour, a bonus screening was held in early December in Washington, D.C. The event, hosted by ECMC Foundation grantee the Aspen Institute and ECMC Foundation drew an audience of policymakers, researchers, practitioners and reporters.

After the screening, postsecondary education experts from organizations, including the Institute for Higher Education Policy, the American Association for State Colleges and Universities and Montgomery College, talked about today’s community college students, discussed whether institutions are adequately meeting their needs and presented their ideas on how to best prepare students to succeed.

To help students, "we must understand the rich complexity of the students who come to us," said DeRionne Pollard, Montgomery College president. 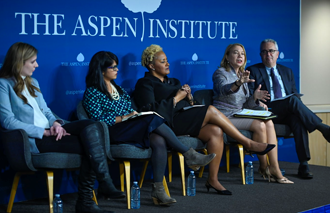 Julia Ajinkya, vice president of applied research at Institute of Higher Education, believes community colleges should do more than educate and train for jobs.

"Community colleges should not only respond to workforce needs but proactively take control and produce the leaders we need," she said.

Roadtripper Becca Rodack was also a panelist that day. She reminded the audience that sometimes, one person can make a big difference in whether a student succeeds.

"I had a very open advisor," she said. "The career advisor came to classes on the first day of school and told us where her office is—so I went."

The summer trip that Becca went on is over and the initial nationwide screening tour is complete, but One Step Closer’s impact—on the roadtrippers, the Roadies, viewers and all who came across it—will continue.

Supported by both the College Success and Career Readiness teams, Roadtrip Nation received $850,000 in 2016 to send a team of three community college roadtrippers to interview professionals who also attended community college. The experienced was filmed and developed into a one-hour documentary that can be viewed on public television and streamed online at https://www.pbs.org/video/one-step-closer-xcaooj/.