JFF Horizons: Building New Bridges to the Future of Work and Learning

By Erik Day, Getting Smart

Last week I attended JFF (Jobs for the Future) Horizons, a conference that served as a powerful reminder that we won't be able to prepare our students for the rapidly changing world and technologies like AI if our education, policy, and private sector systems continue operating in silos, and that highlighted creative ways to conceptualize and build new partnerships and bridges between those sectors.

This is a huge, complicated, beast of a challenge, but represented at Horizons were a few new initiatives and ideas in particular that did a very good job of illustrating the power of cross-sectoral collaboration, and that give me hope that these partnerships will continue to accelerate progress until, hopefully sooner rather than later, our society catches up to the changes that technology is bringing. I won't bore you by talking about how great the conference itself was (it was, though–and I'm not just saying that because Getting Smart was media sponsor for the event), but instead want to dive into some fresh ideas being advocated for by the people who attended and presented at Horizons, who are making big and interesting efforts in this area.

At the event, JFF announced the launch of the first round of big initiatives from JFFLabs, the new innovation engine of the organization that will be focused on the increasing roles that technology and corporations play in workforce, education, and training, and that will serve as a sandbox for prototyping, incubating and experimenting with "big thinkers" and "big ideas."

Their previous and current Entrepreneurs in Residence (EIRs) demonstrate the type of people and advisors they are bringing to the table:

Their effort to align and accelerate the field's understanding and working relationships with technology-enabled startups (both for-profit and non-profit) includes initiatives such as:

Additionally, their effort to create a "sandbox" for incubating the development of technology-enabled solutions, "moonshot initiatives" and grand innovation challenges, will include initiatives such as: 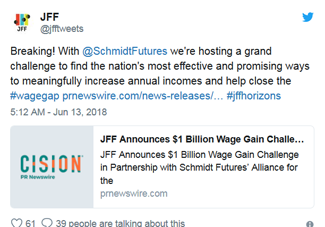 2. Efforts to Design Solutions and Systems Must Still Focus on Equity.

Fresh approaches to creating more equitable systems ranged from Stephanie Lampkin's AI-based approach to removing bias from the hiring process, to Zoran Popovic's EnLearn, to the final panel highlighting ambitious young people from disadvantaged backgrounds who are nonetheless finding success. Overall, the event served as a great reminder that we can't move the needle forward without doing so for everyone. 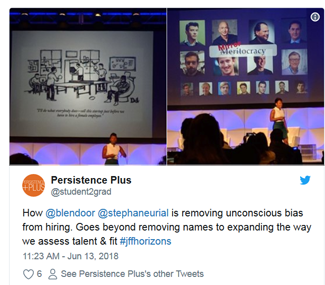 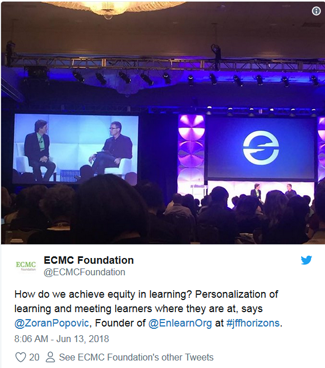 A large amount of money is spent on the education industry every year. How can it be used most effectively? There were three moments that stuck out to me as really solid food for thought:

Joseph Fuller, Professor of Management Practice at Harvard, argued: "Instead of asking ourselves how we can do what we've been doing better, we need to ask ourselves: Why is what we're doing now not achieving the results we want?"

Verna Eggleston, who leads women's economic development initiatives at Bloomberg Philanthropies, shared that, "In my 40 years of work I've found folks who have the will but lack access, and I've found folks whose will has been broken but who have access to all the grants and social capital in the world… Philanthropy's greatest opportunity is to be the bridge between access and will."

"If you believe in equity, if you believe in people having better lives, we need to have the economic foundation," argued Jason Palmer of New Markets Venture Partners. What are the metrics for a "good job," he asked, and how can we invest in (and incentivize investments in) companies and services that create them? 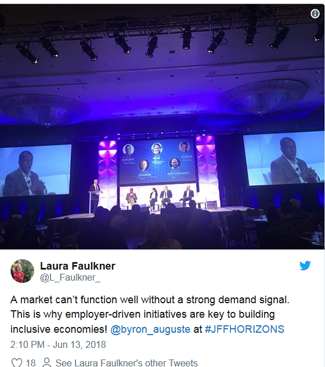 One mini-plenary that stuck out to me featured Lydia Dobyns, President & CEO of New Tech Network; Elliot Washor, Co-Founder of Big Picture Learning; a student from one of each of their schools; and Loretta Goodwin, Deputy Director of the American Youth Policy Forum as moderator. The students in the room, who had taken part in rigorous work-based/experiential programs and who are now preparing for college, did much of the talking, and it was refreshing to hear student success stories first-hand.

This is something I've seen a lot of recently (Northeastern University's NExT initiative jumps to mind), and seeing it clearly present as an undertone throughout the conference reaffirmed to me that momentum for experiential learning is growing.

5. New Forms of Credentials Are Needed.

We've been thinking a lot about the high school credential (and how we might rethink it), so it admittedly may have been a bit of cognitive bias that made me zero in on this, but that being said: there was a lot of discussion about how we communicate learning and skills at Horizons.

"We have to find a way to look beyond traditional credentials–to create pathways of credentials that allow people to move into earning ranges that will allow them to take care of their families," said Monty Sullivan, President of the Louisiana Community & Technical College System, in reference to Louisiana's work to remove the high school diploma as a barrier to community college participation. 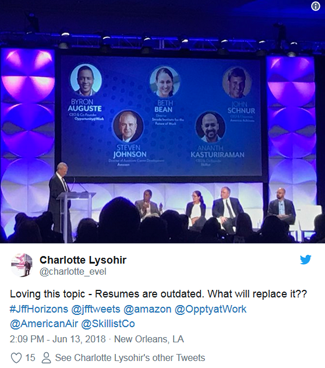 edX CEO Anant Agarwal's discussion ended with him saying that if he had a magic wand and could make one wish, it would be to make people rethink learning credentials in order to make them more modular.

Getting Smart will be releasing an in-depth white paper on the landscape of Competency-Based Education in mid July, which will examine how CBE can be a valuable tool for accelerating the shift toward a system in which students are able to more efficiently able to demonstrate their knowledge and skills and progress through learning.

I left JFF Horizons feeling inspired, if a little overwhelmed, by the potential for progress toward a better future for more Americans. As Maria Flynn, President & CEO of JFF, said, "The future of work isn't just happening to someone else. It's happening to all of us." With 800 national leaders in education, workforce, and tech innovations, the conference was a step forward in generating solutions that will improve America's education and talent development systems to meet the needs of our rapidly changing economy.

I also think it will be worthwhile to keep an eye on JFFLabs, with the $1 Billion Wage Gain Challenge being a great example of one of those things to keep in mind the next time your cleverest friend has a good idea–it might just come to life.