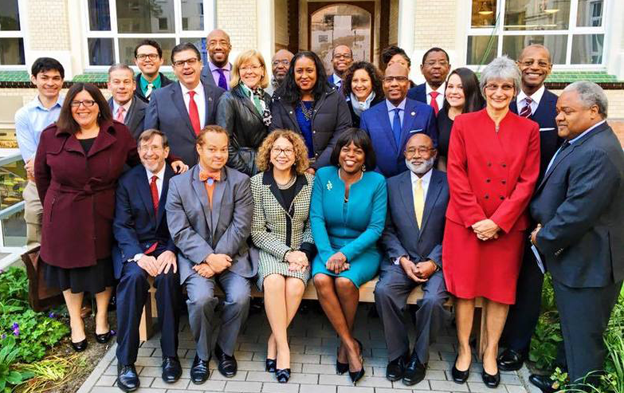 The University of Pennsylvania's Penn Center for Minority Serving Institutions (CMSI) has embarked on yet another noble mission to impact people of color in higher education. Late last year, the repository for minority serving higher education institutions announced the creation of a pathway to presidency program for aspiring leaders, "MSI Aspiring Leaders Forum and Mentorship Program."

"We are excited to train and provide mentoring to the next generation of MSI leaders," stated Dr. Marybeth Gasman, founding director of CMSI and professor of higher education at the renowned Ivy League institution. "The mentors we have on board from across the country exemplify 21st century leadership skills and innovation, which is exactly what the nation's MSIs need."

Courtesy of $745,000 in grants from the ECMC and Kresge Foundations, the MSI Aspiring Leaders will prepare the next generation of MSI presidents. The program includes both a leadership forum and mentorship program and has been designed to help promote diversity among higher education leadership. "ECMC Foundation supports the MSI Aspiring Leaders forum and mentorship program because it will enable MSI leaders to coach, mentor, and transfer knowledge and skills to the next generation of leaders," said Sarah Belnick, program director, College Success at ECMC Foundation. "The program plays an important role in enabling future leaders to implement tools and techniques that improve college success among underserved students."

"The leaders at Minority Serving Institutions are some of the most innovative and dedicated educators in the nation—they have to be because they're at institutions that educate students who are historically underserved," said Gasman.

Kresge's Education Program deputy director, Caroline Altman Smith, echoed Gasman's sentiment. "Kresge is proud to help launch this Forum because we want to see a stronger pipeline of leaders of color in higher education," she said.

Currently, close to 60% of sitting university presidents are over the age of 60. According to a 2016 TIAA Institute study, college and university faculties have become slightly more diverse in the last 20 years. Most gains for underrepresented minority groups have been on the non-tenure track. In 2015, The Chronicle of Higher Education reported that full-time faculty members at American colleges and universities remain heavily white, according to data from the U.S. Department of Education.Seventy-eight percent of full-time faculty members — and 84 percent of full professors — were white in 2013. Whites are even more over-represented among college leaders, according to data from the American Council on Education. Eighty-seven percent of presidents, and 88 percent of those recently hired, are white.

"Leading a university is a challenging job, and that can be especially true at Minority Serving Institutions," said Altman Smith. "Given how many presidents will be retiring in the current years, and how important minority-serving institutions are to the nation's college completion agenda, we believed it was critical to invest in the professional development of those who will lead MSIs in the next decade and beyond."

The Penn Center for Minority Serving Institutions brings together researchers and practitioners from Historically Black Colleges and Universities, Tribal Colleges and Universities, Hispanic Serving Institutions, and Asian American, Native American, and Pacific Islander Serving Institutions. Part of Penn's Graduate School of Education, CMSI's goals include: elevating the educational contributions of MSIs; ensuring that they are a part of national conversations; bringing awareness to the vital role MSIs play in the nation's economic development; increasing the rigorous scholarship of MSIs; connecting MSIs' academic and administrative leadership to promote reform initiatives; and strengthening efforts to close educational achievement gaps among disadvantaged communities. "In the next four years, we will be in the process of completing the mentoring for the second cohort of this program," stated CMSI's associate director for programs, Paola "Lola" Esmieu. "By this point in time we will have worked with 60 aspiring leaders. In eight years, we hope that the aspiring leaders will have maintained their trajectory and will be either in the process of actively pursing presidential posts at MSIs or are beginning the process."

The Penn Center for Minority Serving Institutions is a grantee partner of ECMC Foundation. In 2016, we made investments to support the launch of its new program, "MSI Aspiring Leaders." Read this guest feature from Marybeth Gasman, the Founding Director of the Center.