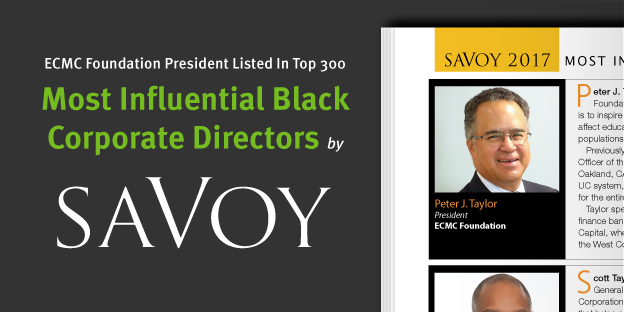 Savoy Magazine is the leading African-American culture, business and lifestyle publication. The fall issue, where Taylor is listed, features an exclusive profile of General Colin Powell and a number of articles that highlight the success of Black professionals and entrepreneurs.

In the issue's "Special Section: Diversity in Higher Education," Taylor authored "New Model of Career and Technical Education Aims to Bridge the Skills Gaps," where he addresses the skills gap, a mismatch between skills the workforce has to offer and skills employers need. Taylor calls for a "collective effort from everyone in the community, including career and technical education (CTE) institutions" to be part of the solution. To begin closing it, he says, requires improved training and quality instruction for jobs that require some postsecondary education, but not a four-year degree.

In the piece, Taylor highlights the work that Altierus Career College (Altierus), a CTE institution and partner of ECMC Foundation, is doing to transform the CTE space and close the skills gap. Students at Altierus are overwhelmingly from underserved populations, including low-income students, students of color and first-generation college students. They also include students who are "new traditional"—over the age of 25, working full-time and often supporting families. To help their students enroll, persist, and graduate, Altierus provides generous financial aid options and enhanced academic, career and life support services.

Partnering with organizations like Altierus is just one of the countless number of impressive programs and initiatives that ECMC Foundation, under Taylor's leadership, supports. Since 2015, Taylor has led more than $60 million in investments affecting educational outcomes in the areas of teacher and leader development, college success, and career readiness. Taylor has also actively pushed for investments in innovative programs and cutting-edge, evidence-based strategies.

Before joining ECMC Foundation, Taylor served as the chief financial officer for the University of California system. Active in the community, Taylor was recently appointed by Governor Jerry Brown to the Board of Trustees of the California State University system. He also serves on the boards of Edison International and Pacific Life. He previously served as president of the UCLA Alumni Association Board of Directors, the alumni representative on the UC Board of Regents and a board member of the J. Paul Getty Trust.