The Scholar With an Agenda for Racial Equity 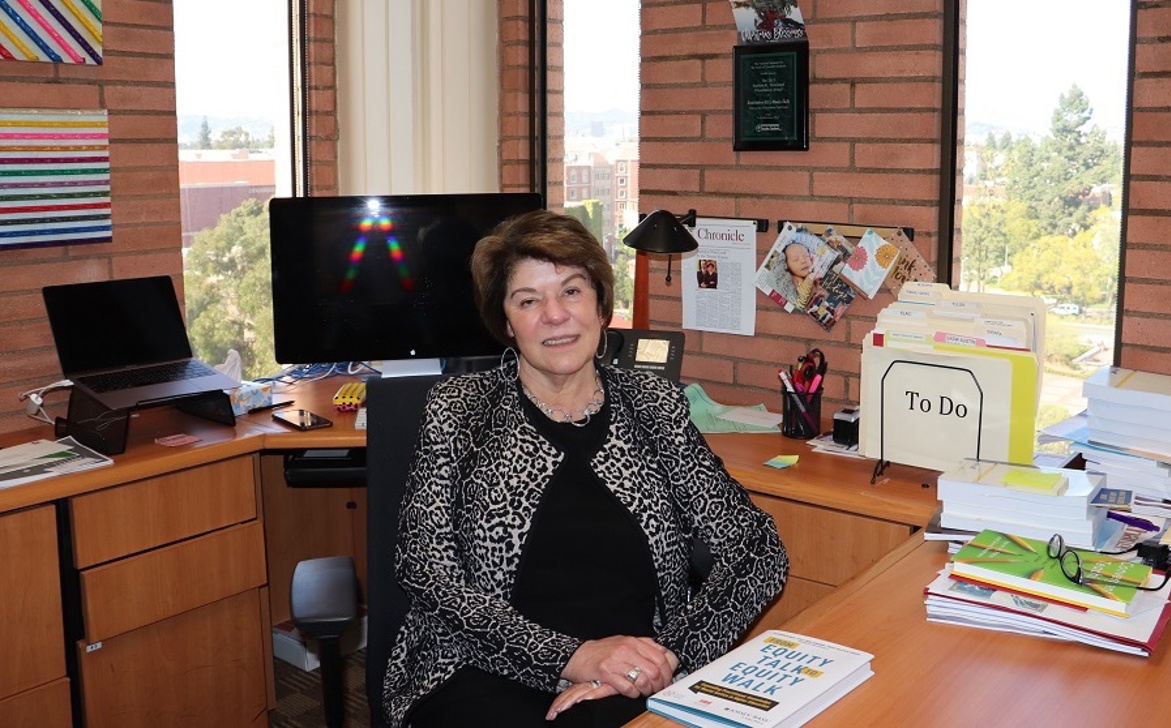 Many academics and researchers would not want to be associated with the term “activism,” but Dr. Estela Bensimon, professor at the University of Southern California (USC) and acclaimed author, doesn’t mind.

Estela has spent a large part of her career in education fighting for justice and racial equity—even when it was not a popular stance to take. “I have always been willing to disrupt the status quo,” Estela offers without reservation.

Estela’s life experiences have fueled her commitment to driving change. Born in a small town in southern Argentina, her journey to the United States began when her mother, an avid reader, came by an article about higher education in America. “She made up her mind that my brother and I had to go to college in America.”

Thus, in 1962, at the age 12, Estela and her family made the trek to the U.S., leaving behind a hometown with no paved streets, no television, and just 7,000 residents.

Before settling in Cherry Hill, New Jersey, the family drove across the U.S.—an experience that became a pivotal moment for Estela as it gave her a first-time glimpse at racism in America. “We saw in the South: separate drinking fountains, separate bathrooms.”  When she enrolled in school, Estela’s accent was mocked by fellow students, and one of her teachers continuously embarrassed her by correcting her pronunciation of English words. High school was difficult, she says, and it gave her a keen understanding of what it felt like “to be considered ‘the other’ just because you are different.”

Despite the cultural, social and racial challenges she experienced in school, Estela excelled academically, and she was accepted into Montclair State University. During her college years, Estela participated in the anti-Vietnam War movement and joined the Moratorium March in Washington, DC. After college, she devoted the early part of her career towards advocating for educational rights for the Puerto Rican community in New Jersey.

It wasn’t until the 1980s, when she enrolled into an education doctorate program at Columbia University, that Estela discovered her passion for research and academia. She later went on to teach at several universities including Columbia University and Pennsylvania State University, before arriving at USC in 1996.

In her early roles, Estela says she “took every opportunity to go out into the field and interview higher education leaders” and to learn about their frameworks for leadership and organization. Over time, “simply collecting data and analyzing data was no longer satisfying” and “it felt unfulfilling.”

Thus, four years into her professoriate role at USC, Estela founded the Center for Urban Education (CUE) at USC’s Rossier School of Education.  At that time, “everyone was talking about diversity and how to increase access for Black and Latinx students. But nobody was talking about equity in outcomes for those students.”  CUE was created to remedy this—bringing equity-mindedness to institutions of higher education through socially-conscious research, tools, and learning institutes.

Drawing from Estela’s background and passion for social activism, CUE has worked to empower practitioners to act as agents of change, enabling them to be critically race conscious as they respond to changing demographics in educational systems. “CUE’s agenda has remained explicitly political and race-conscious,” Estela states without reservation.

One major hallmark of the Center is its framework for equity-minded practice and policy, which has been adopted by foundations, professional associations, and institutions of higher education across the country.  In 2019, ECMC Foundation granted CUE $150,000 to help the 28 campuses of the California Community College system implement this framework, and to provide technical assistance as they develop and implement student equity plans that align with goals set forth by the system’s chancellor.  Equity plans are currently being created by the campuses and will be completed in Fall 2020.

Having worked with an impressive, national list of institutions and major organizations including the Bill and Melinda Gates Foundation, the Ford Foundation, The Campaign for College Opportunity, the California Community Community Colleges Chancellor's Office and more.   Estela has many accomplishments to be proud of. Aside from her work through CUE, she is a teacher, mentor, and author, and she has held some of the most respected leadership positions in American higher education. When asked what she wants next for CUE, Estela replies, “Simply for the work to continue on. I want faculty members to be able to see how they can change education outcomes for minoritized students, by changing their own actions. I look forward to the day when higher education leaders, faculty, staff and trustees learn to view racial inequity in educational outcomes as a warning of institutional dysfunction in urgent need of remediation.”

To celebrate its 20th anniversary this year, CUE had been planning an event to take place in April, but it has postponed the celebration until the Fall of 2020 due to the impact and spread of the coronavirus. CUE’s important work, however, is continuing during this time, as is Estela’s commitment to supporting colleges and universities to improve their performance for Black, Latinx, Indigenous, Southeast Asian and Pacific Islander students.